Despite the Mac Pro 1,1 and 2,1 (2006/7) models hitting past the 10-year mark, there is, surprisingly, a great amount of hardware that is still available for use. In contrast to the age of the older (first) Mac Pros, there is still some new hardware that is being released, which can be used on these Mac Pros, primarily due to the software support available.

Granted, Apple stopped supporting these Mac Pros at Mac OS X 10.7 Lion, we can still squeeze a bit more life out of them using Piker Alpha’s boot.efi mod, which allows these older Mac Pros to boot Mac OS X 10.11 El Capitan. This, my friends, is where the GTX 980 TI graphics card comes in.

Why Such a Modern GPU in Such an Old Machine?

In much the same way that others have squeezed life out of their older computers, I too, enjoy doing the same, but (perhaps) take a more “enthusiast” approach. There are very few, if any, generations of technology/computers, let alone an Apple computer, that have been afforded the degree of versatility and third-party hardware/software support/functionality that the current era of tech has extended over to the first gen Mac Pros.

The idea behind this was being able to create a very powerful, no-questions-asked workhorse – and it worked out just fine.

WARNING: 2018-001 security update doesn't work atm (won't boot). Please don't update to the lastest patch yet until a solution is found.This is one way to In.

To install or even use a GTX 980 TI inside a Mac Pro 2,1, one must have the following already done to their Mac Pro: 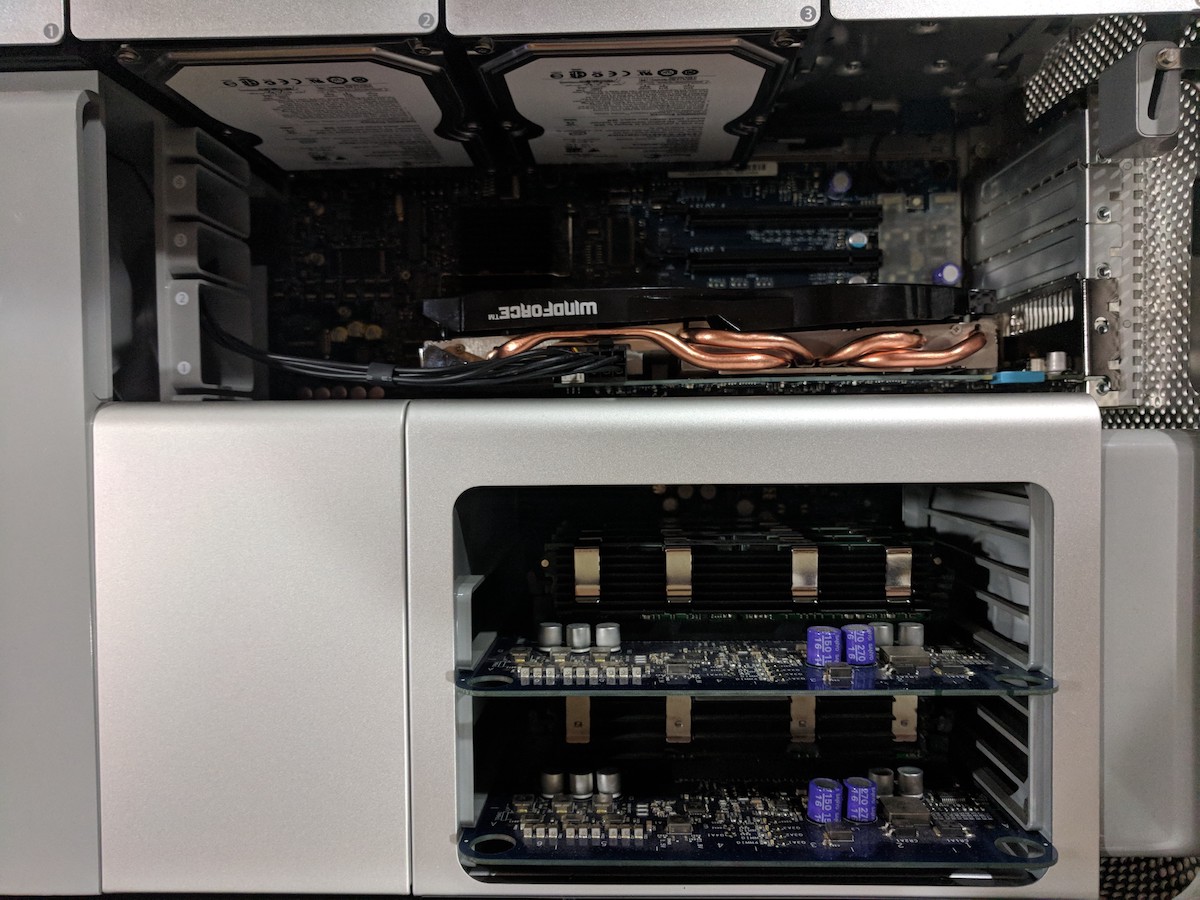 This is not a perfect solution, but it can work perfectly when setup and generally not messed around with.

The particular card I’ve been using is a lovely Asus Strix Nvidia GeForce GTX 980 TI 6 GB model. I picked it up off eBay for $260 back in May of 2017. I picked up 2x 6-to-8 pin PCIe adapters for the card. The card uses 225W under full load, which shouldn’t be a problem for the Mac Pro’s 980W power supply. 75W is being drawn from each PCIe connector, as well as 75W from the PCIe slot. Even under full load, this is still within the designed power capacity of the power rails.

Having operated this GPU inside this Mac Pro for over a year, I can safely say I’ve had no issues. 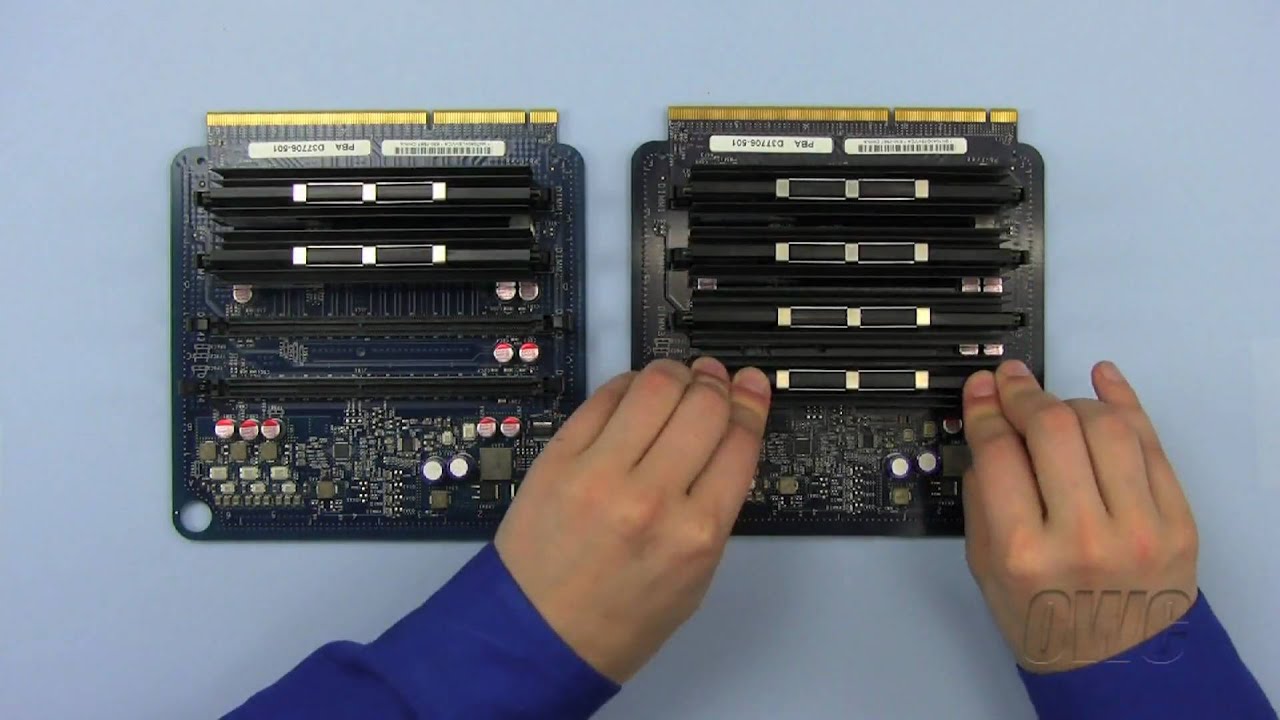 How about VR on this machine?

It works, but there’s a catch. SteamVR doesn’t pick up on the Oculus rift yet, though I’m certain that if I had the HTC Vive, it’d work just fine. For now, I dual boot Windows 10 off an SSD, play around on the Mac Pro 2,1 via the Oculus app. It took a bit of messing around with the Oculus app to get it working on my Mac Pro as it “needed” SSE 4.2. It was easy to trick the installer/find an old version, and simply update it, and it works.

I mostly play the game Arizona Sunshine on the full resolution, with medium textures and shadows, and always hit the 90fps mark. Realistically, we’re playing a VR game on a mirrored 1200 x 1080 display. It’s really not difficult for this Mac Pro to crunch out such a resolution, on medium settings. The “wow” factor of it being in VR, however, surprised me, that it even worked.

How about Video Editing?

How about Basic Uses?

Would I Recommend It?

If your idea of a fast machine is to just jam a brand new GPU into a Mac Pro of this age, the answer is no. There are a few other factors in this machine’s speed, such as having completely matched RAM, a 960 GB SSD RAID array comprised of four 240 GB SSD’, and simply keeping the insides clean. While the market value of 1,1 and 2,1 Mac Pros are plummeting (and quite frankly, nonexistent, if at all), the components that are available to this thing are quite generous. 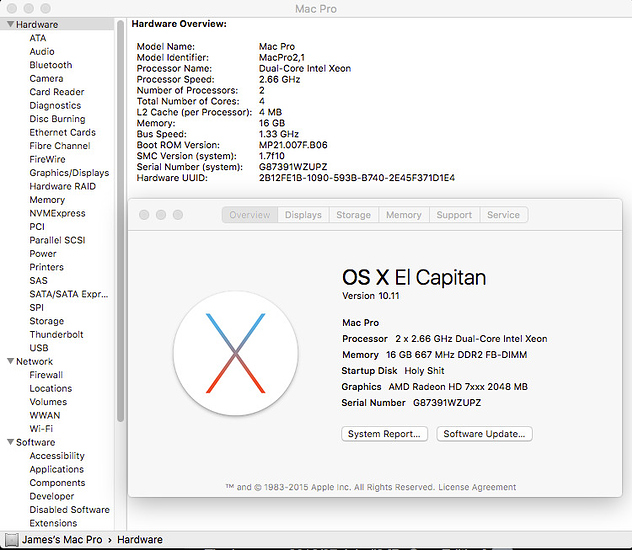 If your idea of a fast machine is understanding the limitations/benefits of a machine of this age, and you are willing to invest in this thing, the answer is yes. As old as the Mac Pro 1,1 and /2,1 towers are, they’re very much worth investing in. As of the time of this article, cryptocurrency mining has sharply driven up the prices of the GPU, so chances are, for the price point, I’d suggest a 970/980.

How to Accomplish This?

How to Install the Nvidia Web Driver Software?

If all is well, this is how the card should register in the system, via the various apps which display the card.